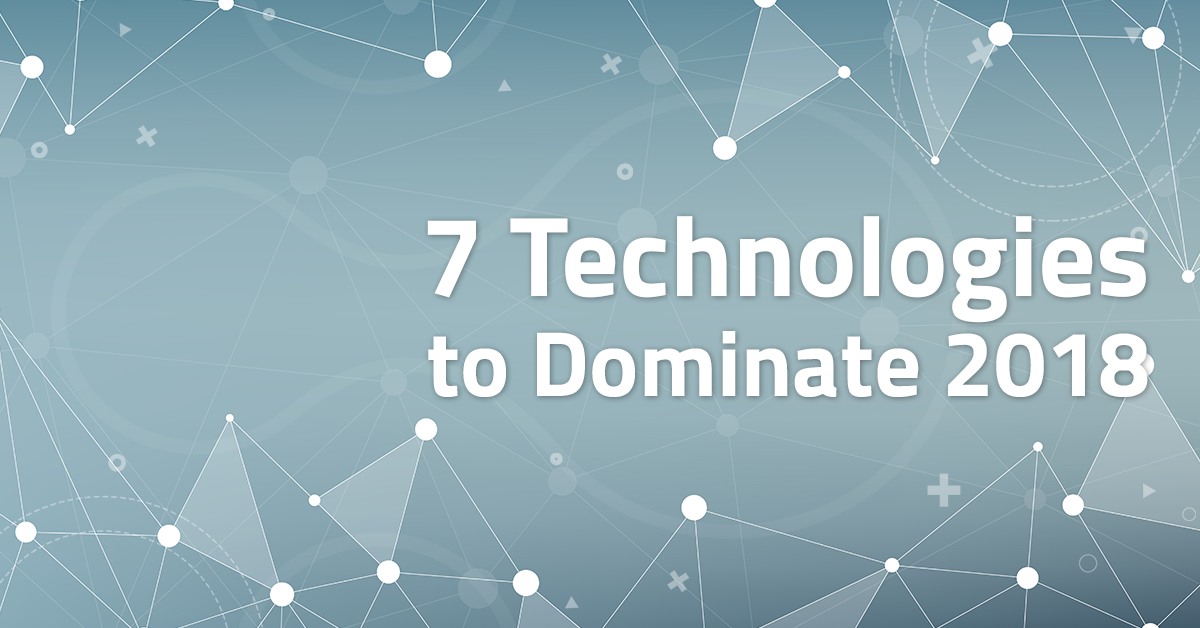 Interested in new technologies, or just curious about what’s to come?

Whether you’re an avid fan of new technologies or someone who came here by accident, it never hurts to prepare yourself for what’s to come. In fact, such knowledge can greatly help you be ready for the upcoming trend – be it to gain a financial upper hand on your competition or to be first to appreciate in your social circle. Therefore, without further ado, let’s talk a bit about the most robust, developing technologies, which are the most likely to dominate 2018.

Mostly everyone agrees that consumer data is to become one of the dominant issues of 2018. Collecting data will become an even bigger priority this year. Why? Well, where else can you get such enormous amounts of information if not from people this information concerns? People use their smartphones, computers, laptops and whatnot every day. No poll, study or research comes even close to the amount of data processed during daily activities. As some companies will soon gain access to that data, they will start utilizing them. Positive outcomes of such procedure may include more personalized ads, better algorithms, etc.

5G network, alongside 5G telephones, is what a lot of people are waiting for – and by a lot, I mean millions. It is said to be able to revolutionize the way consumers use the internet, but also the way developers consider and think about apps and streaming content. As 5G is to be around 10 times faster than 4G, it would make it faster even than home internet services. Just think of possibilities with such a strong mobile internet!

Everything that concerns AI gets plenty of spotlights – that never changes. Ever since people started imagining intelligent machines, the idea captivated and enchanted them. Today, the progress of Artificial Intelligence technologies is not only about pumping more assets into their research, but also about discovering new fields of application. The year 2018 is by many called the name of AI, mostly because it gets incorporated in so many new fields of technology and science.

Digital centralization is all about developing technologies which allow us to connect all sorts of devices in what we call a “smart” system, in order to be able to manage our everyday life with just a few click. It turns out the primary choice for such “smart controller” is usually our smartphone, but the same can be achieved with a different device. What matters is the ability to control everything else – from our TV to the fridge. 2018 will show us the development of such connections and links, to centralize the management of our smart devices.

Widespread use of machines instead of manpower is the norm in almost every branch right now, but there are still fields for progress. 2018 is said to be the year in which we will see even more development in order to change human resources into machine resources. Of course, jobs won’t be fully replaced, but it is time to start thinking about adapting to the situation – whether we like it or not, this trend is not going away, and we all have to be ready to find different ways to be useful. Why not take a course on machine maintenance?

UIs are probably the most important aspect of any app, programme or software, at least from consumer’s point of view. With the expanding dominance of mobile devices over desktop counterparts, it is only logical that mobile UIs will also keep evolving. As long as they stay intuitive and continue to serve their primary goals, we think that customer will be quick to adapt and embrace them.

Devices, machines and apps are already pretty good at recognizing speech and understanding commands, and there is no sign of this technology stopping to expand in 2018. In fact, it’s going to get only better from now on, which will give us the opportunity to seamlessly communicate with all sorts of devices. Giving commands to your car, telephone or even your fridge seems pretty futuristic, but may become the standard pretty soon!

This rounds up our list – if you’ve got any more ideas for amazing technologies which will go huge in 2018, let us know in the comments!